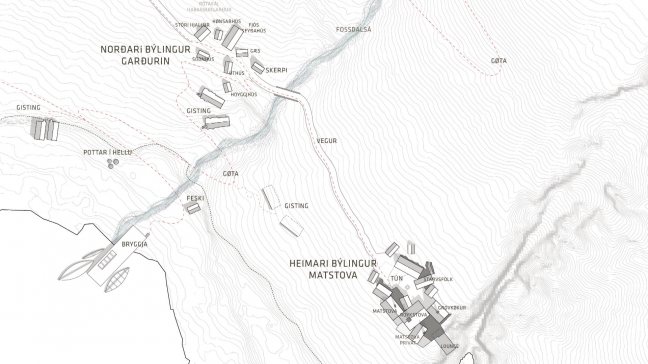 A sketch of the planned Koks restaurant district around the Fossdalsgjógv gorge between Velbastaður and Syðradalur, Streymoy

The company offered tenant farmer Páll Djóni á Steinum DKK 1 million for permission to build on his land, which lies in and around a picturesque gorge between Velbastaður and Syðradalur.

But this is not going to happen, insists the farmer.

“This is far too extensive, too grandiose and certainly not in line with the ‘unspoiled’ spirit with which the Faroe Islands is branding itself to the rest of the world,” he says.

“It would cause significant disruption to the sheep farming and other farming activities in the area, and it would eat a big chunk out of a genuinely unspoiled piece of land.”

Gist & Vist has applied to Tórshavn City Council for permission to use the land, and the council is, in principle, authorised to override the wishes of the tenant farmer.

“All I can do now is hope that our local councillors have the common sense to see that this project should not go ahead.”