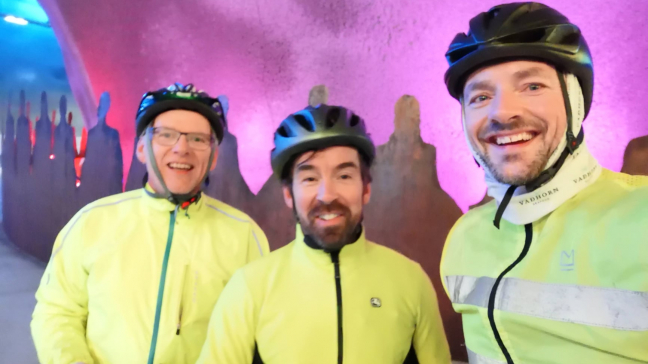 Curiosity and a hint of rebellion today prompted three cyclists to break the rule of not riding bikes in the new subsea tunnel.

Police caught up with the three men after being alerted via the tunnel’s CCTV system and handed them a DKK 700 fine.

The cyclists were aware of the cycling ban, but they were curious and wanted to spark a debate on behalf of the country’s cycling enthusiasts about this ban, says one of the cyclists, Jákup Petur Eliasen.

“Cycling is allowed in all the other tunnels in the country – even the dark, narrow ones – so why not in this one?” he says. “In many ways, cycling inside a tunnel is safer than cycling outside as you’re protected from wind and rain, and there’s not much chance of a sheep jumping in front of you.”

According to Teitur Samuelsen, CEO of the Tunnel Company, the stricter safety regulations in the new tunnel are due to its great length.

“At 11.2 kilometres, this is the second-longest subsea tunnel in the world,” he says.

“The risk assessment report for the tunnel advises against allowing slow-moving traffic in a tunnel of this length, and while I do sympathise with the views of the cyclists, we intend to follow the safety recommendations.”

He adds that about 18,000 vehicles travelled through the tunnel in the first 24 hours after it opened on Saturday at noon.

The Tunnel Company initially announced that no toll would be charged for driving through the tunnel until the end of the year. This period has now been extended to 10 January at midnight.