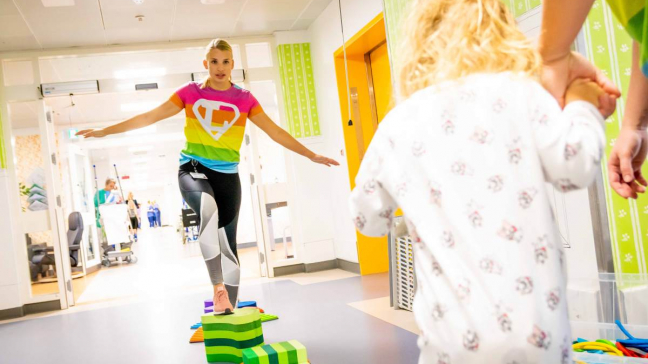 The play heroes are physiotherapists specialising in engaging with hospitalised children through play and exercise.

“Fun and exercise have a wonderfully positive effect on children who struggle with illness,” said Elmar Ósá, chief physician at the National Hospital’s children’s ward.

“It’s not always fun for children to be in hospital, so this gives them a much-needed respite.”

The play heroes are particularly useful in relation to unpleasant experiences such as taking blood tests.

“By playing before a blood test and being greeted by the play hero for more play and exercise after the test, everything becomes so much easier for everyone.”

The play heroes not only make the hospital experience more fun for the children; they are also helpful for parents and hospital staff.

A mother whose three-year-old son is a patient at the children’s ward said:

“My boy is delighted to be here. And while he is having fun with the play heroes, I can have a good talk with the doctors. This is a great initiative.”

The play heroes service is sponsored by the Danish Børneulykkesfonden foundation and is free of charge for the Faroese hospital service.