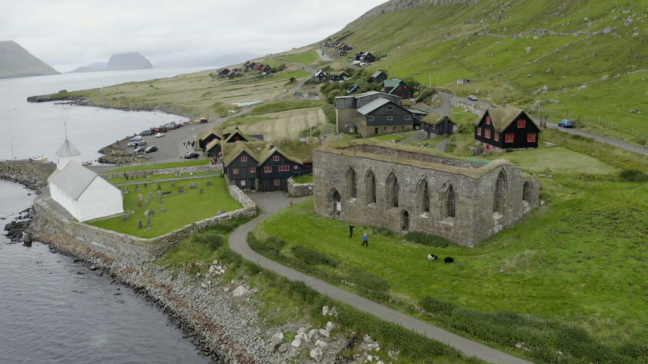 The 700-year old St Magnus Cathedral in the village Kirkjubøur, Streymoy, is a treasure trove for archaeologists and historians.

One particularly interesting part of the cathedral is the so-called Golden Locker, a lead box inside the cathedral's end wall. The wall features  a soapstone decorated with a picture of Jesus Christ on the Holy Cross, along with an inscription in Latin, which translates roughly into English as follows:

"Contained herein are the following holy treasures: the cross of our Lord, the sacrificial lamb, see here the holy Virgin Mary… bones from the blessed martyr Magnus… from the grave of the holy Thorlak.”

Whether this is true is a matter of dispute; however, the Golden Locker, which has been opened twice by archaeologists, has been found to contain remains of bones and wood.

For various reasons, further examinations have not been made of these objects.

This is one of the stories which archaeologist Símun Arge will be telling on his guided tours around Kirkjubøur this summer.

For more information about the tours and registration, visit the National Museum of the Faroe Islands website https://visittorshavnshop.fo/bilegging/midaldar-biskupssetrid-i-kirkjubo/.