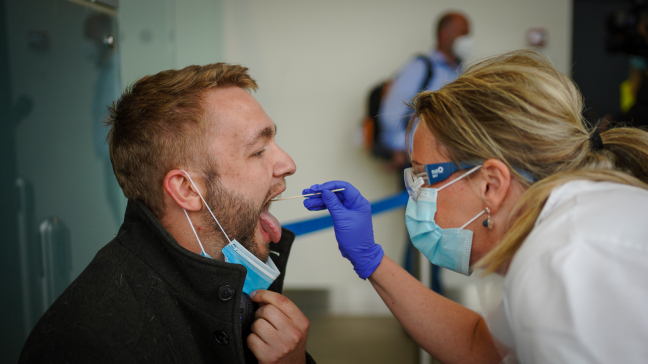 Mandatory testing of incoming travellers could not be implemented in time for the 1:53pm arrival of the first flight yesterday due to a pending approval of the new testing system.

Only hours before yesterday’s opening of the borders to travellers to and from most EU and Schengen countries, the new testing strategy put in place at the airport and at the Port of Tórshavn was still awaiting an approval from the Data Protection Agency regarding the handling of sensitive personal information by a private laboratory.

Without this approval, public health professor Pál Weihe, who has the medical responsibility of the new testing system, could only advise travellers to get tested.

He said that 125 people agreed to get tested, while six declined, saying they had recently been tested.

“In principle, I cannot say whether these six people are infected with Covid-19,” he said.

Shortly after the first flight arrived, the Data Protection Agency signed the approval, and mandatory testing could go ahead as planned.

The Ministry of Health made an agreement with private test lab Thetis on June 24, which authorises the lab to conduct tests on behalf of the ministry.

According to the contract, the Ministry of Health and the Department of Occupational and Public Health have the ultimate responsibility of the personal data collected in the tests.

The contract also states that it cannot come into force until the Data Protection Agency has approved the project.

To issue the approval, the Data Protection Agency had to assess the physical, administrative and technological safety of the new testing system, as well as ensure that the authoritative basis was correct.

The agency received the request for the approval this week, and parts of it were not submitted until Friday evening.