Lots of fun in phone-free classroom

08.01.2021 - 07:29
Aktuelt
Lots of fun in phone-free classroom
A teacher’s experiment with an extended mobile phone ban in her class has proved a big hit with pupils
Jákup Dahl 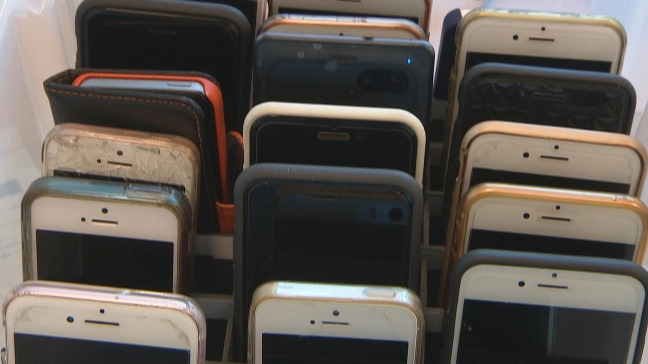 One of the school classes across the country that has placed a ban on mobile phones is 9B at Eysturskúlin in Tórshavn.

While the other ninth forms at the school have a morning ban on phones and then return the phones to the pupils after the lunch break, 9B pupils have to go phoneless throughout the school day.

“I wanted to take it a bit further to see how the pupils would respond,” says class teacher Miriam Johannesen.

“After only a short adjustment period, it was delightfully surprised to see that they approved of this change.”

One of the pupils, Olaf Eyðfinsson, says that the pupils initially regarded the new initiative as a joke.

“But it didn’t take long for us to notice a change. We went from all sitting glued to our phones in the breaks between classes to suddenly socialising a lot more and just running about the place. We’re having a lot more fun now.”

Another pupil, Birita Vestergaard Jensen, says that pupils from other classes have started coming into their classroom to see what all the fuss is about.

“They have noticed that our class is a lot more energetic and vibrant than theirs. It’s almost as if we are reminding them that it’s possible to have fun at school.”

Newcomer pupils join in the fun

The teacher only has limited insight into the pupils’ academic progress as she has only had this class for one year. But she is convinced that the extended phone ban has a positive impact on the learning environment.

“The phone ban has without a doubt strengthened the social cohesion in the class,” she says.

Two of the pupils in 9B were born in Asia and one in Africa. None of them speak Faroese, and one does not even speak English.

“It is very clear that these three students are now a lot more involved in the group. They laugh more, and they seem to enjoy their time at school a lot more now.”

Other schools in the country, including the new Skúlin við Streymin in Eysturoy, have a total ban on mobile phones throughout the school day.

Having witnessed the positive effect of banning phones in her classroom, Johannesen hopes that other schools will follow this trend.

“It may be a challenge to make this work in every classroom and in every school in the Faroes, but I believe and hope that we will be seeing a formal phone policy in schools within the next ten years,” says Johannesen.

“I hope the success we have had with this initiative will help inspire other schools to lock away the pupils’ phones throughout the school day.”