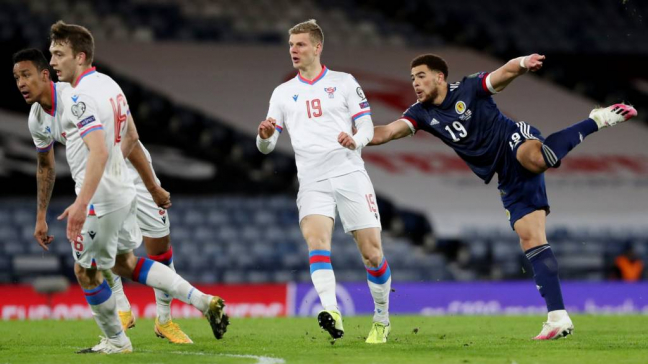 Three World Cup qualifiers in less than a week appeared to have taken their toll on the Faroese players when the took on Scotland last night.

Too many defence errors and a few missed chances at goal resulted in a 4-0 defeat at Hampden Park in Glasgow.

Scotland piled on the pressure from the very start, opening the score in the seventh minute, courtesy of Aston Villa midfielder John McGinn.

>> SEE ALSO No repeat of 1990 fairytale win against Austria

This did not dampen the spirits of the Faroese side, and 15 minutes into the game, Brandur Hendriksson Olsen was only a few inches away from levelling the score. But his long-distance shot was brilliantly saved by the Scottish keeper.

A few near misses by the Scottish strikers followed, but the 1-0 score held up until halftime.

The Faroese side came out strong in the second half, coming close to levelling the score in the first minutes when a keeper error left Jóan Símun Edmundsson with an open goal; however, the Faroese Bundesliga midfielder failed to convert the chance.

The Scots then took control of the game, scoring three times in the space of 17 minutes to bring the final score to 4-0.

With one point after three games, the Faroese side is now joint bottom together with Moldova in Group F of the World Cup qualifiers. Denmark tops the group with 9 points, followed by Scotland (5) and Israel and Austria with 4 each.

The next game for the Faroese side will be at home against Israel on 1 September.