Japanese talent and charm a big boost to Strendur

13.04.2021 - 06:09
Aktuelt
Japanese talent and charm a big boost to Strendur
Despite being more than 8,000 km away from home, four Japanese handball players are enjoying life in a quiet Faroese town
Símun Christian Olsen 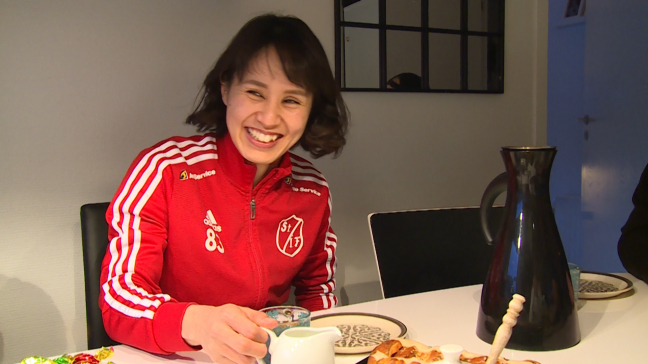 StÍF, the handball club based in Strendur, Eysturoy, has experienced something of a revival in recent years.

This is in no small part thanks to the club’s Japanese players: Yuika Kirimoto, Mamoko Nakamura, Mao Otani and Haruka Gima.

The club’s Japanese link started with Haruka Gima, who was contacted through a Danish talent scout to coach the StÍF youth teams and to play for the women’s team.

Now, a few years later, she is considered one of the best handballers in the Faroes. She has become the symbol of the revitalised StÍF team, which is currently battling for the national title against Tórshavn’s Neistin.

The other three, all from Tokyo, first came to the Faroes to work at Strendur-based fish factory Vaðhorn.

“I like my job, but it’s hard work,” says Yuika Kirimoto.

Their boss, Jens Martin Knudsen, is happy to have the Japanese women working in his factory.

“They are fantastic. They work hard and they are always in a good mood and they’re very polite,” says Knudsen, who himself is no stranger to the sporting world, having achieved international fame in the 1990s as the ’bubble hat wearing goalkeeper’ of the Faroese national football team.

The four Japanese women say they are happy to be in the Faroes and have settled in well despite the great differences between the quiet life in Strendur and the bustling city life in Tokyo.

“I really like it here,” says Gima. “The people are lovely, and they are like family to us.”

And StÍF coach Jón Rasmussen is delighted to have them on his team: “Everyone knows them and they speak with everyone. They’re just like anyone else in our town.”