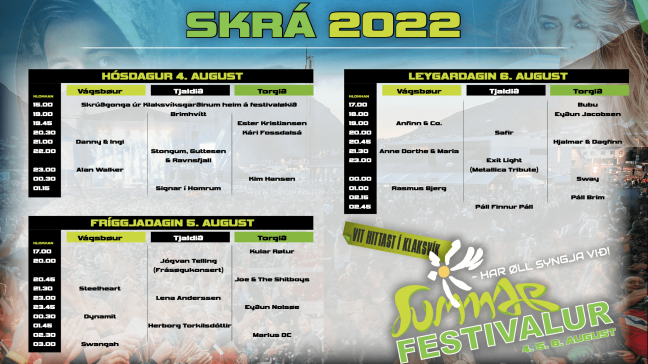 The Summar Festival has just begun in Klaksvík after two consecutive cancellations due to Covid restriction.

The festival started at 3pm today with a parade that can be likened to a carnival, according to festival organiser Steintór Rasmussen.

This year’s headline act, Norwegian/British DJ Alan Walker, will take to the stage at 11pm tonight. Walker, 24, is primarily known for his 2015 mega hit “Faded”.

Other hits include “Alone”, “All Falls Down”, “Darkside” and “The Spectre”.

All other acts for tonight are homegrown. Danny og Ingi will take to the main stage tonight at 9pm. Stongum, Guttesen og Ravnsfjall will play on the “Tjaldið” stage at 10pm, followed by popular singer/songwriter Signar í Homrum at 01.15pm.

The big international name for Friday night is American hair metal band Steelheart, known for hits such as “I’ll Never Let You Go”, “She’s Gone” and “We All Die Young”. Steelheart go on stage tomorrow night at 9.30pm.

On Saturday, Anne Dorte and Maria, members of famous Danish 1980s pop band Tøsedrengene, will play on the main stage at 9.30pm.

Danish actor and entertainer Rasmus Berg will play the final main stage concert on Saturday night. His renditions of Danish folk singer John Mogensen, both in film and on stage, have proved highly popular.

The other acts are all Faroese, and they include Joe & The Shitboys, Marius, Swangah, Safir, Dynamit, Eyðun Nolsø, Kim Hansen, Anfinn & Co and Páll Finnur Páll.