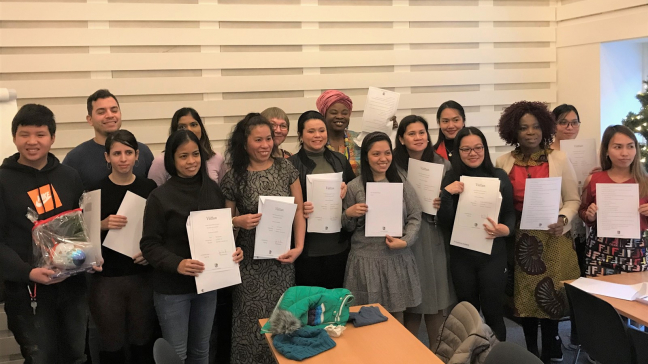 Faroese language teaching for foreign nationals is based on the Common European Framework of Reference (CEFR). Photo: The Ministry of Cultur

There has been a big increase of non-Nordic immigrants to the Faroe Islands in recent years.

In January, there were 2,102 people of non-Nordic origin in the Faroes, which is about 4 percent of the total Faroese population. These people represent 107 different nations.

“An integration act would greatly ease the transition into Faroese society for immigrants,” says the minister, who is currently working on a bill on integration policy, which he expects will be submitted to Parliament this autumn.

”We have seen in the countries around us that a big influx of immigrants can easily result in new enclaves being formed within these societies due to a lack of structure in the integration efforts.”

He adds that a well-structured framework for integration would greatly help immigrants to develop, find their feet and thrive in Faroese society.

A key component of a successful integration policy is language tuition.

New Faroese as a second language courses are now available. These two-year courses are significantly more extensive than those previously offered through evening classes.

“It may sound a bit harsh that immigrants have to learn the Faroese language, but I firmly believe that this is in their best interest if they want to integrate into Faroese society,” says Abrahamsen.

“We have yet to discuss what happens to those who fail their language exams. It’s unlikely that they will simply be turned away, but we will do everything we can to ensure that immigrants learn about the Faroese language and culture.”