04.12.2019 - 09:51
Aktuelt
Faroese pupils’ reading skills have become worse
Reading skills are on a decline, while science and maths results are improving, according to international test of pupils’ scholastic performance
Tróndur Olsen 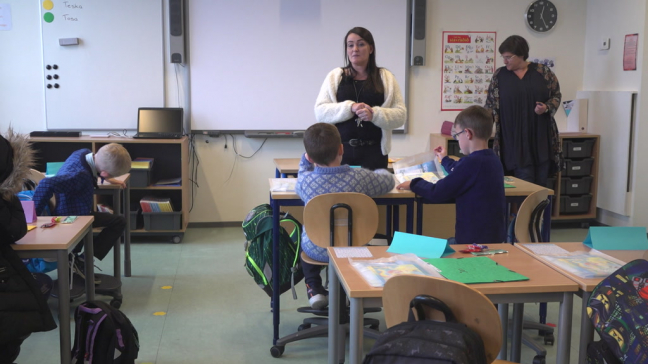 The Faroe Islands are third from bottom of OECD nations in the PISA (Programme for International Student Assessment) test, with only Chile and Mexico trailing behind.

This became clear when the results of the 2018 data collection were presented today.

PISA is a worldwide study intended to evaluate educational systems by measuring 15-year-old school pupils' scholastic performance on maths, science and reading. The test was first performed in 2000 and has since been repeated every three years. Its aim is to provide comparable data with a view to enabling countries to improve their education policies and outcomes.

Faroese pupils have shown a steady progress in their PISA results, but they have yet to reach the OECD average, except in maths, says Erla Olsen, head of the Faroese language department at the University of the Faroe Islands.

“The big different in the results of this test is that we are now above the OECD average in maths,” she says.

”Faroese pupils are still below the OECD average in science, despite great improvements on the previous test. But there has been a significant decline in reading skills.”

Olsen believes that the poor result in reading skills does not fully represent reality.

“There are indications that the testing methods in the reading section of the test may have affected the result, because we’re seeing the same decline in most of the countries with which we normally compare ourselves,” she says.

“But the fact remains that we are as far behind as we were before.”

The latest PISA test indicated that finding information in texts appears to be the biggest problem for Faroese school pupils.

It also showed that girls fared significantly better than boys in the test.

“In response to test results from previous years, we have placed a great focus on including all pupils in our teaching, and we are delighted to see that these efforts have come to fruition,” says Olsen.

“An unfortunate consequence is that some of the stronger pupils have been neglected. We will now increase our efforts to better accommodate these pupils.”

In a questionnaire, only half of the Faroese pupils reported that they were motivated to do the test.

This is a cause for great concern, according to education minister Jenis á Rana.

“We need to instill a different attitude in our children with regard to these tests,” he says.

“Perhaps we should do like football teams and their supporters do ahead of big games – with proper preparation weeks in advance of the test. If the children approach these tests as representatives of their country, I’m sure the results would be a lot more representative of their real abilities.”