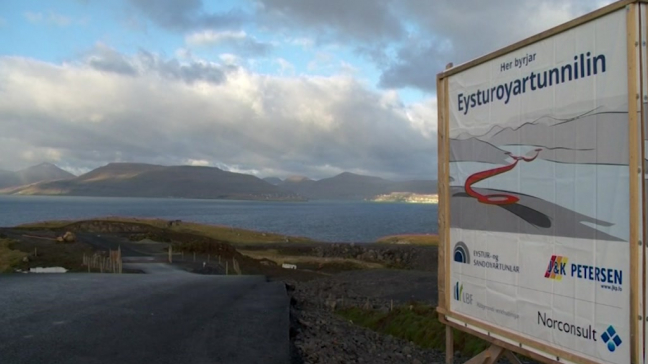 Traffic into Tórshavn will increase by half when the new Eysturoy-Tórshavn subsea tunnel opens next year, according to projections from road and tunnel authority Landsverk.

“Traffic into Tórshavn along the Kaldbaksvegur will increase from 10,000 per day to around 14,000 per day,” says Mikkel Frandsen, an engineer at Landsverk, who headed the projection study into traffic flow to and from the upcoming tunnel.

A roundabout with three lanes is being built above the village of Hvítanes. One lane will be connected to the Kaldbak tunnel, one to the new subsea tunnel and one to Tórshavn.

According to Frandsen, commuters coming from the Kaldbak tunnel can expect the worst traffic jams, as they must give way to traffic from the new tunnel.

Queues may extend into the tunnel

But those coming from the Eysturoy subsea tunnel will also experience queues.

“It is not inconceivable that rush-hour traffic bound for Tórshavn may be stuck in queues reaching all the way into the tunnel, which of course is not ideal as there would be no way of getting the cars out in case of fire inside the tunnel.”

Landsverk has recommended constructing an additional access road to Tórshavn, but Frandsen doubts whether such a road will be completed in time for the tunnel opening next year.