Victims of racial abuse speak out

09.06.2020 - 09:37
Aktuelt
Victims of racial abuse speak out
Although considered one of the world’s safest communities with virtually no crime, the Faroe Islands are not free of racism
Elin Mirjamsdóttir 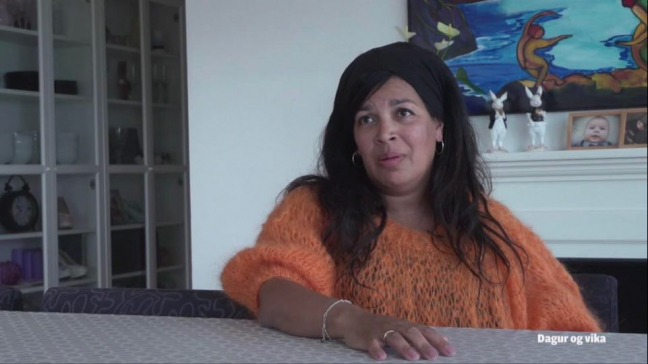 Angela Fagranes talks about how racial abuse has affected her life

Hundreds turned out to Sunday’s ‘Black lives matter’ protest march in Tórshavn as part of the worldwide anti-racism response to George Floyd being killed by a police officer in the US.

Several Faroese people who have experienced racial abuse spoke at the event of how derogatory remarks about their skin colour have affected their lives.

After the event, KvF spoke to two of the women at the march, Angela Fagranes (53) from Argir and Eydna Cæcilie Dalsgaard (18) from Tórshavn.

They have both experienced verbal and physical abuse directed at the colour of their skin, experiences which have left indelible scars.

Angela says she did not experience any racist abuse until she started in school.

“I remember vividly an episode on my first day at school where children were standing on top of a fence and I was standing below on my own. The children were competing to see who could hit me first with pebbles,” she explains.

“This is where I really started feeling the effect of having dark skin, of being different. It was here that I realised I am not accepted. And of course that’s a feeling that is difficult to shake off.”

This episode was followed by countless incidences of physical and verbal abuse at school.

“Regardless of how hard you try to repress these memories, it is impossible to forget it and just pretend everything is okay,” says Angela, who has become a household name in the Faroes after many years working in children’s television.

A punch followed by the ‘N’ word

Eydna Cæcilie has also had many disturbing experiences of racist abuse at school.

“My clearest memory, and one of my earliest, of racial abuse is from third grade when a boy was constantly following me around school during intervals, threatening to cut off my hair because it was so ugly. I managed to run away and hide, so I kept my hair. But there was not much help to get from the teachers because they didn’t take it seriously.”

After numerous other instances of racially fuelled harassment and other unpleasant experiences, she eventually had to move to another school.

But the racial abuse was not confined to school.

“Once, at the swimming pool in Tórshavn, there was a little child staring at me. This was not so uncomfortable for me because I was used to looking a bit different. The little boy asked the mother why I was so dark. What followed shocked me: the mother, clearly embarrassed, came over to me and asked if I could move to another section of the swimming hall because she didn’t want to explain to her child why some people look different to ‘us’.”

In another incident, Eydna Cæcilie accidentally bumped into a drunk woman in a bar.

“I apologised, saying I was distracted by something on my phone. But before I knew it, she punched me in the face and screamed the ‘N’ word at me.”

Angela adds that teachers and others have frequently commented on these episodes by saying, “Come on, it’s not that bad. Surely you can cope with it”.

“And sometimes when I have sat down with a teacher who tried to help me, they have quoted the well-known phrase ‘what doesn’t kill you only makes you stronger’. I disagree very strongly with that phrase. It does not apply in all cases,” she says.

“Why should I be able to take more abuse than others? I have developed a natural tendency to try to excuse the people who make these remarks, thinking that their intentions are not as bad as their words or their behaviour. But this does leave its marks on a person. There is no way around that.”

Eydna Cæcilie agrees, saying that after 18 years of constant racial abuse, it really doesn’t matter how strong you are as a person. It leaves scars, and trying to fight the feelings leaves you exhausted, she says.

The colour of your child

Angela is married to a Faroese man. When she was pregnant, the skin colour of their child was constantly on her mind.

“A common question for expecting parents is ‘will it be a boy or a girl’. This was irrelevant to me. I just hoped and prayed that it wouldn’t be a coloured child because I know they will experience what I have experienced,” she says.

“I have five children now. And luckily some of them are not so dark.”

She adds that she has probably taken more showers than most other people in the Faroes as a result of being told countless times that “black people stink.”

Racism exists in the Faroes

When asked whether racism exists in the Faroes, there is no doubt in Angela’s and Eydna Cæcilie’s minds.

“It most certainly does,” says Eydna Cæcilie. “It may not be as prominent as in other countries, but it’s here, it’s very real and it’s extremely hurtful.”

Angela adds that racism is not only present in Faroese schools, in the nightlife and elsewhere; it is also a big problem on social media and what some people write there is often even worse than what goes on in reality.

“There is nothing I, Eydna Cæcilia or any other coloured individual can do to stop this; all we can do is try to remind people to watch what they say and do, and remember that it can be unbearably hurtful,” says Angela.

“It’s especially difficult when these remarks are not made because I’m stupid or because I’ve done something wrong. It’s just because I’m brown. There’s nothing I can do about that. I’ve tried to change it. But I’m still brown.”