New finds may lead to rewriting of Faroese history

20.06.2020 - 12:56
Aktuelt
New finds may lead to rewriting of Faroese history
Archaeological findings suggest that Christianity may have come to the Faroe Islands more than 100 years earlier than previously thought
Elin Mirjamsdóttir 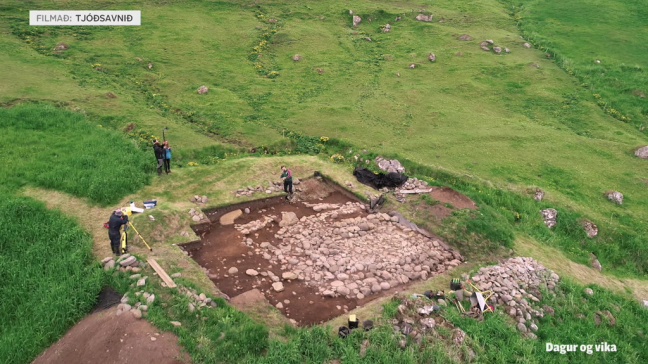 Viking chieftain Sigmundur Brestisson (961–1005) is widely believed to have introduced Christianity to the Faroe Islands in the year 999.

But the unearthing of two churches in a churchyard in Velbastaður, Streymoy, suggests an earlier and a more gradual introduction of Christianity to the islands, as findings suggest Christian people having lived in the area as early as the year 900, and possibly even earlier.

This site has long been of interest to archaeologists, but new findings in the area provide particularly fascinating clues.

Findings from the 8th century

“We have known about one of the churches for some time,” says Helgi Michelsen, curator at the National Museum of the Faroe Islands.

“What’s new is that while studying the remains of this church, we came across the foundation stones of an even older church, or possibly a chapel, below it.”

Below these stones, the archaeologists found charred barley grains which have been carbon dated to between the years 765 and 905.

“This gives us an indication that there may not have been a single person, Sigmundur Brestisson, who converted the entire population at the same time. It now appears likely that Christian people have been living alongside those who believed in the Ases for more than a century before Brestisson came along.”