Faroes see off Andorra and Montenegro in style

14.10.2020 - 05:33
Aktuelt
Faroes see off Andorra and Montenegro in style
The men’s and the U-21 national football teams both won their games yesterday
Símun Christian Olsen 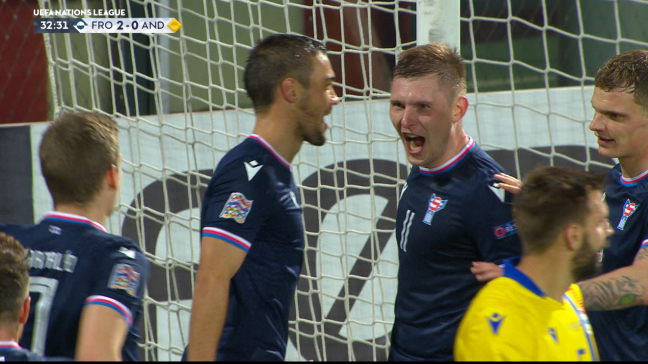 Yesterday was another day of success for Faroese football, with the men’s national team securing a 2-0 win against Andorra and the U21 side beating Montenegro 1-0.

Klæmint Olsen was the star of the day scoring both goals in the national team’s 2-0 Nations League win against Andorra at Tórsvøllur.

With four games played, the Faroe Islands top the League D Group 1 table with 10 points, with Malta in second on 5 points, Latvia in third with 3 points and Andorra at the bottom with 2 points.

With three wins (one against Malta and two against Andorra), one draw (against Latvia) and one defeat (in last week’s friendly game against Denmark) in his first five games, Håkan Ericson is enjoying the best ever start of all Faroese national football team coaches.

The Faroese U21 national team also won its European U21 Championship qualification game yesterday with a 1-0 final score at home against Montenegro, courtesy of a 29th minute goal from B36’s Stefan Radosavljevic.