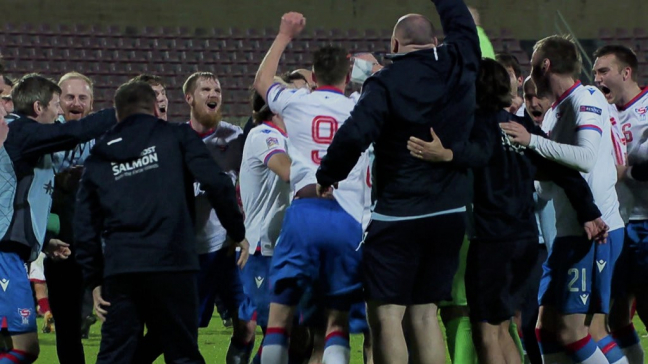 After Saturday’s 1-1 draw against Latvia, the Faroese side only needed a draw against Malta to win the League D Group 1 and advance to League C.

The Faroese side controlled the first half but none of the many chances at goal materialised.

In the second half, the game turned on its head and Malta suddenly dominated proceedings. Shortly after having a goal disallowed due to offside, Malta opened the score in the 54th minute courtesy of Matthew Guillaumier.

>> SEE ALSO Faroes see off Andorra and Montenegro in style

The Faroese side knew what they had to do, and in the 75th minute substitute Ári Mohr Jonsson found the back of the net after a low cross from Sølvi Vatnhamar.

Malta piled on the pressure in the final minutes, but the Faroese players managed to hold on and will now advance to next summer’s finals against the winners of Group D2.

In other football news, the Faroese U21 men’s national team yesterday won its European U21 Championship qualification game against Kazakhstan with a score of 3-2, thus securing ninth place in Group 6 and avoiding the bottom slot of the table.