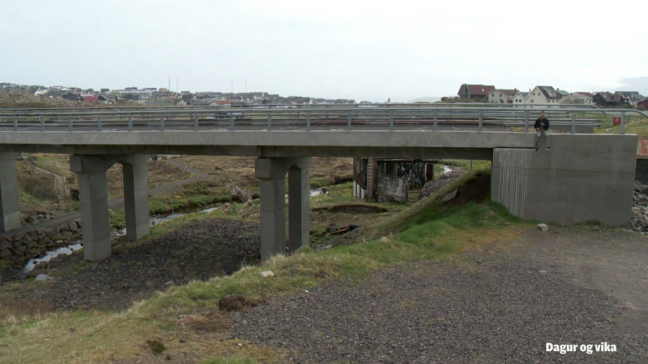 The large concrete bridge at Villingardalsvegur in Hoyvík (pictured above), which was constructed at the turn of the century, has become a well-known symbol of an access road that will probably only ever exist on paper.

But now it finally appears that we will soon be seeing cars driving along the bridge.

This became clear yesterday when Tórshavn City Council and the Ministry of Finance agreed on a plan for an access road to the city.

According to the new plan, a roundabout with four exits will be built above Sandvíkarhjalli. Another roundabout will be made at the Villingardalsvegur/Sundsvegur junction.

This roundabout will lead into a tunnel that will lead to a roundabout near Hotel Føroyar, where a new road will direct traffic to Dánjalstrøð, near Glasir college.

The City Council will pay the greater share of the estimated DKK 288 million total project cost, while the government has pledged to pay up to DKK 110 million.

The government’s contribution is contingent on approval from Parliament, which will vote on the proposal after the summer break. Finance minister Jørgen Niclasen says the proposal has unanimous support from the government, and he is confident that MPs will vote in favour of it.