Unions: MPs should stay out of strike conflict

16.06.2021 - 13:28
Aktuelt
Unions: MPs should stay out of strike conflict
Solutions must be reached at the negotiating table, not in Parliament, say trade unions
Høgni Djurhuus 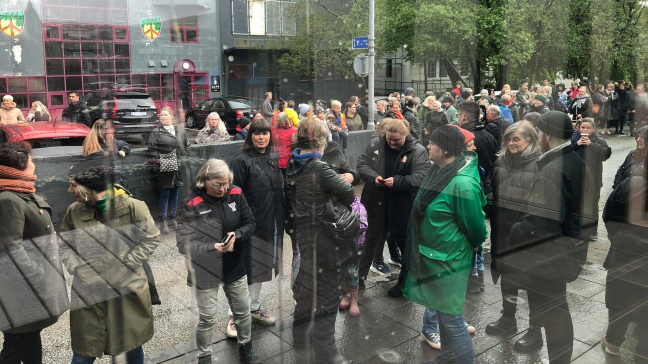 Protesters outside the Houses of Parliament

Hundreds of people, mostly trade union members, gathered outside the Houses of Parliament this morning.

They gathered to protest the trade minister’s proposal to allow strike exemptions in the social services.

This is a breach of the right to strike, according Samtak, a conglomerate of some of the country’s largest trade unions.

>> SEE ALSO All pedagogues go on strike on Monday

The trade minister’s proposal comes after the social services reported on Monday that lives and health were at risk already on the first day of the strike.

Only 16 strike exemptions were given, which according to the social services is far from enough to maintain a safe level of service.

But the trade unions are strongly objecting to the parliamentary intervention in this matter, saying that this is in breach of all procedures, all legislation and all rights pertaining to trade negotiations.

Solutions should be found by the negotiating table, says Samtak, adding that if the government wants more people to work during the pedagogue strike, one solution could be to create more public servant positions.

Trade minister Helgi Abrahamsen had hoped that the bill would be given an expedited passage through Parliament given the urgency of the matter.

However, this was not possible, and the bill will undergo the usual three readings, with the first one taking place on Friday morning.

Read the Faroese version of this article here and here