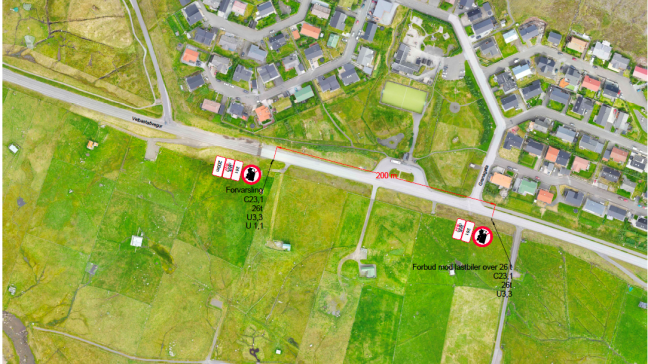 Lorries transporting stones from the Streymoy-Sandoy subsea tunnel through Tórshavn at night have been causing headaches for residents.

To deal with this problem, the city council last month decided to ban these lorries driving through the city streets Monday-Saturday 10pm-7am and all Sunday.

However, due to legal complications relating to the signage, lorry drivers ignored the ban.

Now the city council, in close consultation with the police and the traffic authorities, has revised its ban, limiting it to a 200-metre stretch near the Norðasta Horn district, which essentially blocks access to the city during the above hours.

The revised ban came into force at midnight yesterday.

While the company in charge of the Sandoy subsea tunnel is sympathetic to the residents’ complaints, it says the ban will be a major stumbling block for the tunnel project.

“The ban will lead to a major restructuring of our entire project, causing big delays and budget overruns, which will ultimately burden the taxpayer,” says tunnel project manager Teitur Samuelsen.

Taxpayers to foot the bill

“This is an unfortunate, perhaps even tragicomic, situation because the residents who the ban is meant to protect are the ones who will be hit by the consequences of the ban.”

Finance minister Jørgen Niclasen, who oversees transport matters, says he understands both sides of this dispute.

He has requested a meeting with Tórshavn mayor Heðin Mortensen in an effort to resolve the issue.