23.07.2020 - 03:08
Aktuelt
Closer US-Faroe relations
The US Secretary of State wants the Faroe Islands to open a representation office in Washington
Kaj Joensen 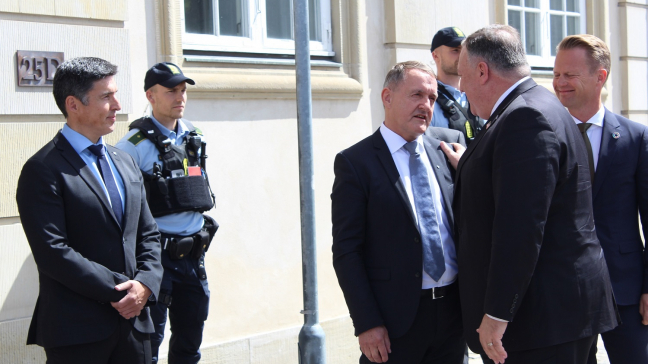 Foreign minister Jenis av Rana is pleased with yesterday’s meeting with US Secretary of State Mike Pompeo in Copenhagen, Denmark.

The overarching theme of the meeting was the relations between the two nations.

Trade relations have been on an upward trajectory for many years, and both nations wish to see this growth continue.

Closer collaboration in other areas, such as research, education, energy and culture also came up at the meeting.

>> SEE ALSO US wants closer ties with the Faroes

“I was particularly pleased when he brought up the topic of opening a Faroese representation office in the United States,” says Rana.

“This is something I have been working towards for some time, and I told Mr Pompeo that as soon as we open our representation office in Israel, an office in the US is next on the agenda. This could become a reality as early as next year.”

Not surprisingly, China and telecoms provider Huawei featured prominently in the meeting, and Pompeo expressed his clear views on the matter.

“He was less aggressive on this matter than I had expected,” says Rana.

“This is probably because they have done their research and they know that our telecoms providers have more or less decided not to work with Huawei.”