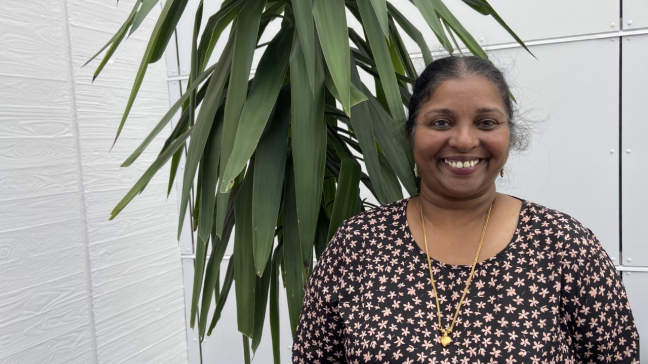 Kalpana Vijayavarathan emigrated from India to the Faroe Islands in 1991

The 57-page book, titled Whisper of Butterfly Wings, consists of poems written in English, with a few Faroese words added to the text.

According to the author, the overall theme of the poems is the emotional challenge of moving to the Faroe Islands.

“I write about the challenge of dealing with the split identity as an immigrant, how to adapt to a new culture and how to start from scratch,” says Kalpana.

One of the challenges facing immigrants in the Faroes is racism, she adds.

“I am 90 percent happy to live in the Faroe Islands, and I always try to focus on the positive sides. The Faroese people can be wonderful, but to say that racism does not exist here is an illusion.”

When they hear English

And try to give me a ‘munnkurv’. [muzzle]

I fight it off and free my expression.

Immigrant I may be

But homo sapien I am

So will I write, speak, make love, live and

Like a chameleon shed the skin of a single identity

And add my ‘fremmanda’ [foreign] Faroese self in.

To brittle pieces of self

Stain deep corners of my mind

In a macabre refrain:

With every breath you breathe on me

You guillotine my identity

You split it in half,

Flesh of self stains the axe

A muddy white and a mottled brown

What do I know?

What do I care?

Only a few weeks after publication, Whisper of Butterfly Wings is close to being sold out, which publisher Sprotin says is highly unusual for poetry in the Faroes. The book is currently being reprinted.

Farlit.fo has the following description of Kalpana’s new book:

"Whisper of Butterfly Wings" is the title of the debut poetry collection by Kalpana Vijayavarathan who has been living in the Faroe Islands since 1991. The fact that life is short-lived and fleeting is illustrated in the delicate and fragile title of the book. The poems are written in English and reflect emotions inspired by the challenges of being an immigrant, momentous events in life, faith in God, observation of Faroese art, and special moments that urged Kalpana to express her emotions.

"The dual identity and experience as an immigrant are most likely shared with other immigrants in the Faroe Islands, and thus my poems might resonate with them. I try to filter all the emotions that fill me and then give them a poetic shape. I never meant to publish my poems, but when I let a selected few read them, they urged me to publish them", says Kalpana.