29.03.2021 - 14:32
Aktuelt
Planned 17-metre cross sculpture sparks debate
The plan to set up a large cross-shaped art installation above the town of Toftir has been met with mixed reactions
Sigrún H. Brend 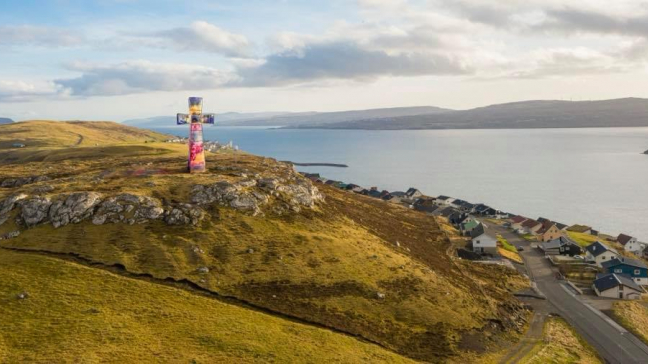 An artist’s impression of the cross sculpture

There has been much debate in the past week regarding plans to erect a 17-metre-tall illuminated cross sculpture above the town of Toftir, Eysturoy.

According to local mayor Súni í Hjøllum, people in the area generally have a positive attitude toward the project.

“This cross represents the Christian foundations of our country,” he says.

“As sculptor Tróndur Patursson said, the cross has a unifying effect.”

But not everyone is entirely happy with the plan.

One of these is Jóhan Magnus Gunrim, who has launched a petition on his Facebook profile against erecting the large sculpture.

He lives near Høganes, where the sculpture is to be located.

“I am not principally opposed to setting up this sculpture. But, like many of my neighbours, I am opposed to the location as this massive construction will obstruct our view, and there will be light and noise issues too,” he says.

So far, just over 100 people have signed the petition.

Creating and erecting the cross sculpture, designed by Tróndur Patursson, is estimated to cost DKK 4-5 million.