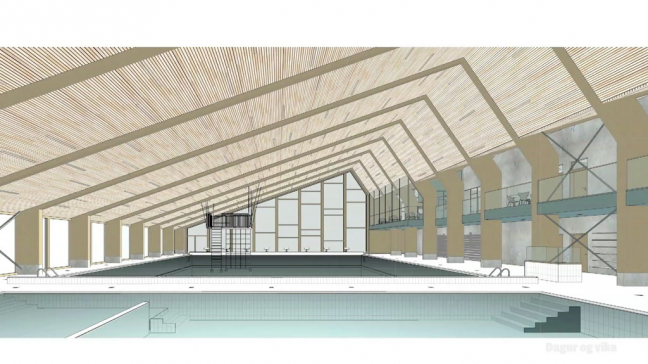 An architect's impression of the new swimming pool in Runavík

Swimming club Neptun, based in the Runavík area, has long been referring to itself as the driest swimming club in the country.

Ever since Neptun was founded in 1964, the club has been calling for a proper swimming pool in the area.

Despite countless promises from local politicians over the decades, the swimming pool remained a mere promise.

But now, it finally looks like the plan is turning into a reality.

A great day for Runavík

“Preparations for a public swimming pool have been underway since early 2016, and we now reached a point where a final decision had to be made,” Runavík mayor Torbjørn Jacobsen said yesterday.

“I was delighted to see that the town council voted 8-2 in favour of this project.”

The swimming pool was one of Jacobsen’s three main objectives when he was appointed mayor in 2012, the other two being a youth house and a harbour expansion.

“We now have a youth house and our harbour has expanded, so today is a great day for Runavík municipality.”