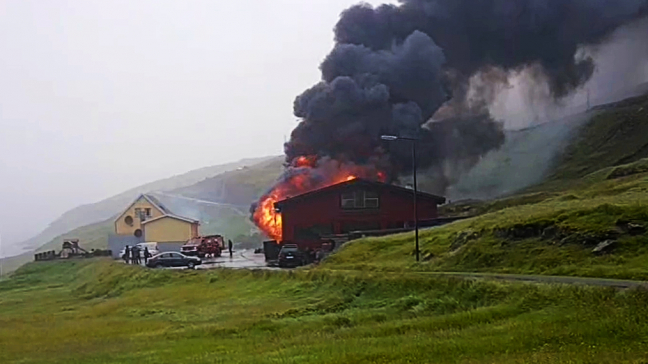 Photo from Ljósá, Eysturoy, courtesy of Rose's Cafe on Facebook

Police received a report shortly before 6pm yesterday of a big fire at the KJ Sandblásing sandblasting plant in Ljósá, Eysturoy.

Fire fighters, police and an ambulance arrived at the scene. No personal injuries were registered.

Three or four nearby houses were evacuated.

The road leading through the village was closed, and all traffic was redirected to the Eiðisgarður road.

By 10.30pm, fire fighters had brought the situation under control, and the village road reopened to traffic.

The area around the building remains cordoned off while investigations are carried out.

One person was inside the building when the fire broke out, but the person escaped unharmed.

Half of the building has burned to the ground.

Police have not yet established a cause of the fire.