No money to fix bad roads

21.09.2022 - 11:56
Aktuelt
No money to fix bad roads
The asphalt budget for 2022 has been spent. Road maintenance will be prioritised next year, vows minister
Hallur av Rana 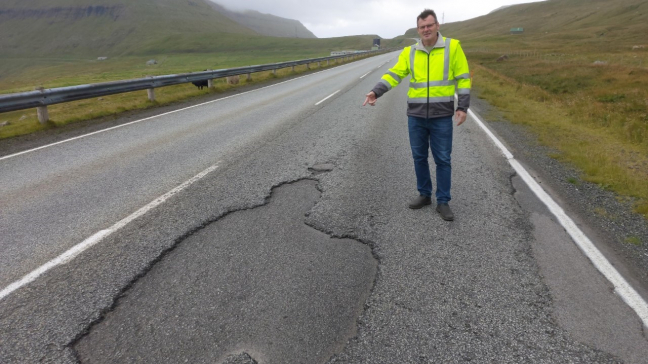 The road between Norðragøta and Fuglafjørður is in poor condition, Árni Jacobsen, regional manager at road authority Landsverk, if fully aware of the problem, but there’s no funding to fix it

Residents in the Gøta/Fuglafjørður region have for some time been complaining about poor road maintenance.

The frustrations have now reached a point where local politicians have started pushing for answers.

And Edva Jacobsen, MP for Sambandsflokkurin, has asked finance and transport minister Uni Rasmussen when the road will be fixed.

Unfortunately, replied the minister, the answer is quite simple: the entire 2022 asphalt budget has been spent, so not much can be done this year.

“Last winter was unusually expensive, with a lot of snow removal on the roads, plus major road repairs following the landslide on the Elduvík road,” he explained.

”This has eaten into this year’s asphalt budget, but road maintenance will be prioritised next year. We even plan to increase the budget.”

In 2019, the backlog in infrastructure maintenance was estimated at DKK 375 million, of which about DKK 100 million was for tarmacking.

This estimate has not been revised since then.

Jóhannis Joensen, MP for Javnaðarflokkurin, has asked the government to take a fresh look at how this backlog can be reduced.

He suggests that a larger portion of Landsverk’s budget should be spent on maintenance instead of new construction.

“I agree with this view,” says the minister.

“However, we have a lot of capital-heavy infrastructure projects running at the moment, and it is not easy to simply terminate these projects from one day to the next.”