26.03.2021 - 05:21
Aktuelt
Faroes secure 1-1 draw against Moldova
The Faroese national football team got off to a decent start in their first World Cup 2022 qualifier
Símun Christian Olsen 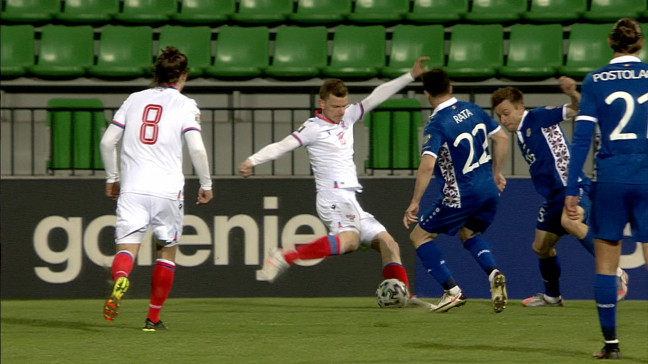 Despite travel restrictions in Moldova, the Faroese squad was allowed entry into the country to contest its first FIFA World Cup 2022 qualifier.

The Faroese side started out well, but defence weaknesses soon started to appear.

Nine minutes into the game, a pass from Sonni Ragnar Nattestad back to keeper Gunnar Nielsen was intercepted by Moldovan striker Ion Nicolaescu, who outsmarted the keeper to open the score for the home side.

The Faroese players had a few good chances to equalise in the first half, but none were converted into a goal.

As with the first half, the Faroese side had a strong start to the second half. The difference was that this time they managed to maintain pressure on their opponents.

After a few good chances at goal and several free kicks near the Moldovan penalty area, the equaliser came courtesy of substitute Meinhard Olsen in the 83rd minute with a close-range shot deflecting off an opponent’s knee past the Moldovan keeper.

The Faroese players defended well in the final minutes of the game, securing their first point in the first qualifier for the 2022 World Cup.

Moldova is ranked 177th in the FIFA world rankings, and the Faroe Islands are ranked 107.