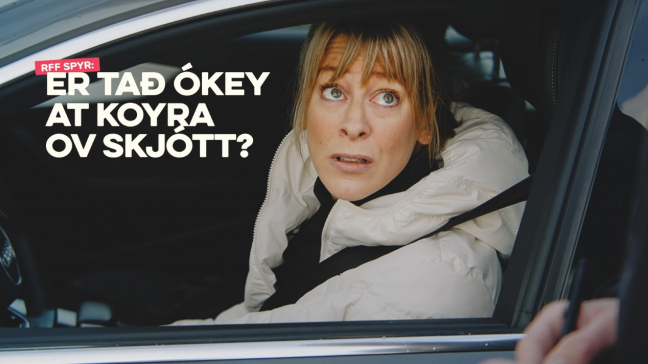 Expect an increase in speed checks this month

More than two-thirds (68 percent) of drivers in a new survey say they frequently or always exceed the speed limits.

The survey, conducted by the Faroese Road Safety Council (RFF), suggests that while most drivers wear a seatbelt and do not approve of drink driving, nearly all respondents consider speeding generally acceptable.

“The attitudes do not appear to have changed, despite numerous campaigns, regular speed checks and changes to the Road Traffic Act,” says an RFF spokesperson.

However, hoping to challenge this attitude, the RFF today launched a new information campaign about speeding in collaboration with insurance firms Trygd and Betri.

The campaign includes a short video clip addressing the “Everyone else is doing it, so why can’t I?” question.

The “Er tað ókey at koyra ov skjótt?” (“Is it okay to drive too fast?”) campaign will run until the end of this month.

Police will be conducting speed checks across the country throughout the campaign.