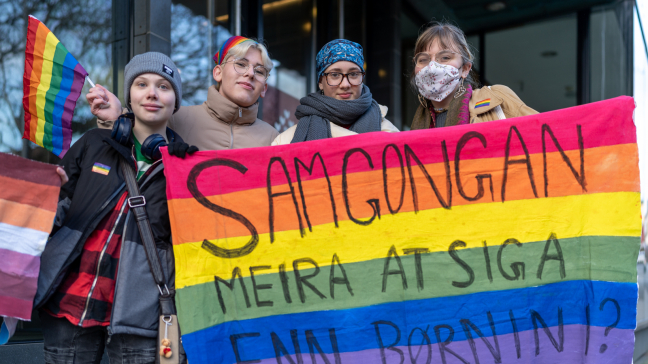 Protesters outside the Houses of Parliament with a banner reading "Is the coalition more important than the children?"

The government coalition stood on the brink of collapse ahead of today’s third reading of two bills relating to parental rights of same-sex co-parents.

Both bills from the opposition were adopted with 18 votes in favour and 13 against.

The vote was preceded by an avalanche of drama. First, doubts were cast over whether today’s third reading would even go ahead as a Javnaðarflokkurin MP had tested Covid positive.

But then a substitute MP was called in and the session went ahead as planned.

The governing coalition has been torn on the same-sex co-parenting issue ever since the coalition was formed as Miðflokkurin has been insisting throughout that it would never support any bills seeking greater rights of LGBT people.

In an effort to save the governing coalition (consisting of Sambandsflokkurin, Fólkaflokkurin and Miðflokkurin) from collapse, Fólkaflokkurin attempted to strip MP Annnika Olsen of her MP seat because she had voted with the opposition at the second reading.

This attempt consisted of two ministers (fishery and social affairs) resigning from their posts and resuming their MP seats, thus ousting Annika Olsen and Brandur Sandoy.

Another twist in the tale

But moments later, Heðin Zachariassen, also an MP for Fólkaflokkurin, announced that he is taking a leave of absence, which brought Annika Olsen back into Parliament.

Prime Minister Bárður á Steig Nielsen of Sambandsflokkurin – who has insisted throughout this debate that all children should be given equal rights regardless of their parents’ orientation – said that the two resigned ministers will not be reinstated after today’s proceedings.

He insisted that his party’s MPs should be allowed to vote with their conscience.

Well, that’s enough drama for one day. We will know more about the fate of the coalition in the coming hours or days.