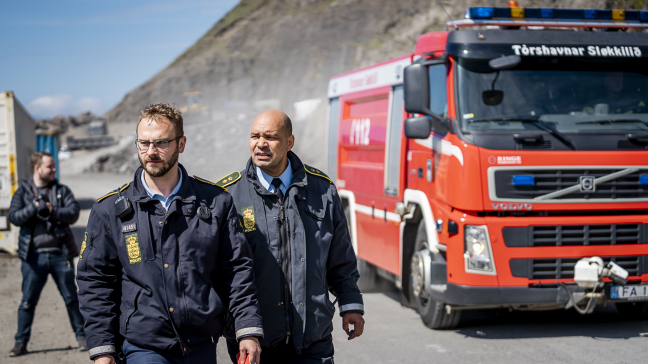 Less than three weeks ago, a fire broke out inside the Sandoy subsea tunnel, currently under construction.

And today it happened again. At 11.25 this morning, Tórshavn’s fire brigade received a report of a lorry catching fire about a kilometre inside of the tunnel at the Streymoy end.

Five fire engines and several ambulances were sent to the tunnel.

Everyone has been evacuated

One person was evacuated shortly after the fire broke out. Twelve others were trapped inside the tunnel. They all managed to make into fire safety units and were evacuated by fire fighters after about an hour.

They have all been taken to the National Hospital for cautionary checks for smoke inhalation.

Another unfortunate repeat happened about 40 minutes before the fire broke out in the Sandoy tunnel.

Less than a week after Sandoy ferry Ternan hit land in Skopun harbour, the same thing happened to cargo ferry Hasfjord at the very same harbour.

The ferry is now docked at Skopun harbour and the situation is under control, according to public transport company Strandfaraskip Landsins.

None of the seven passengers and six vehicles on board the ferry were injured or damaged.

The incident led to changes to the ferry schedule earlier today. For updates, visit ssl.fo.