Faroes cling on to 1-1 draw against Latvia

11.10.2020 - 06:20
Aktuelt
Faroes cling on to 1-1 draw against Latvia
The national football team remains top of its Nations League group after securing a point in a scrappy home game against Latvia
Símun Christian Olsen 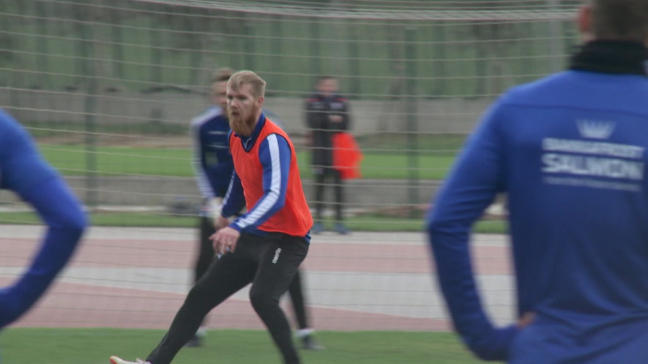 A first-half header from Odmar Færø salvaged a point for the Faroese side last night in a less-than-elegant game against Latvia at Tórsvøllur.

And despite a goal from Jóan Símun Edmundsson being controversially disallowed, the Faroese performance didn’t warrant much more than the one point.

After a decent start, the Faroese system began falling apart after Brandur H. Olsen was forced off the pitch with an eye injury.

The game turned into a scrappy affair with a series of long passes and clumsy close-range encounters, causing the early rhythm to evaporate for a few minutes.

After 25 minutes, having applied increasing pressure on the Faroese defence, Latvia eventually managed to open the score courtesy of a Janis Ikaunieks header from a free kick.

But only three minutes later, Odmar Færø equalised with a header from a corner.

Not much improvement could be seen from the Faroese players in the second half, and eventually the strain from Wednesday’s friendly game against Denmark became apparent.

Nevertheless, Jóan Símun Edmundsson did manage to get the ball inside the Latvian goal, but the linesman had his flag up. Video footage reveals that this decision was disputable.

The Faroese side became increasingly defensive toward the end of the game, and despite mounting pressure from the Latvians, the Faroese players managed to hold on to the 1-1 draw.

With three games played, the Faroe Islands still top the League D Group 1 table with 7 points, with Latvia in second (3 points), Malta in third (2 points) and Andorra at the bottom with 2 points.

The Faroes and Latvia have played twice before, with the results being a 0-0 draw in 2017 and a 2-0 win to the Faroes the following year.

After three days of rest, the Faroes will take on Andorra at Tórsvøllur on Tuesday.